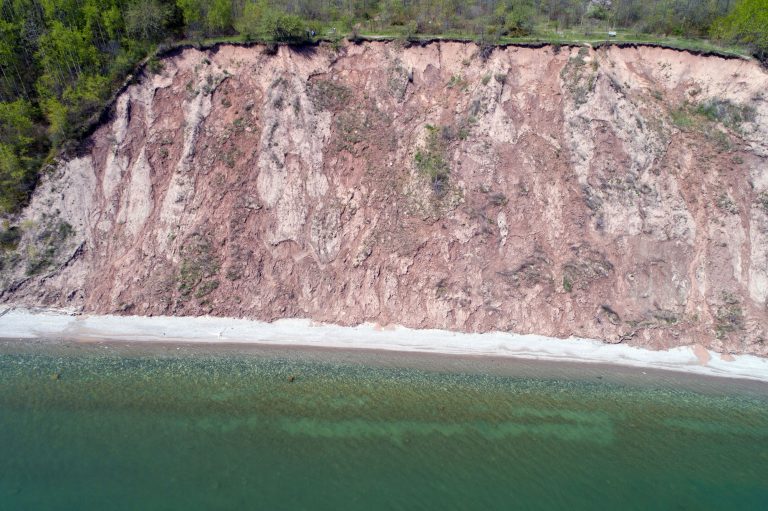 Rising levels in Lake Michigan are causing destructive wave action to reach greater elevations on beaches and in some instances directly erode coastal bluffs.  Removal of material from the base of bluffs is resulting in recession of slope toes and an overall steepening of the bluffs.  Steepening of a bluff increases the probability of a slope failure, thus causing potential hazards for city utilities and citizens who live within close proximity. Once the lake levels have been elevated for an extended period of time, and the toes of slopes have been eroded, bluff failure is then controlled by the material properties of the slope (including strength, i.e., angle of internal friction and cohesion, and unit weight), slope geometry, stratigraphy, and groundwater level.  These properties are less well understood along the Great Lakes shoreline.

To determine what dictates the causes and rates of bluff failure we are building and installing new instruments,  imaging with drones, measuring water pressures, and numerically modeling bluff stability at a number of sites along the Lake Michigan Coastline.  New instrumentation include the development of the BADGER which is an extensometer that can measure in situ bluff properties and movement of the bluff as small as 20 microns at 10 samples a second to record conditions leading up to and through failure. We have also installed a network of seismometers to detect the failures and ambient conditions.  Using RTK drones and photogrammetry techniques we build 3d models of the bluffs that we feed into moment equilibrium hill slope stability models along with groundwater data and stratigraphy. 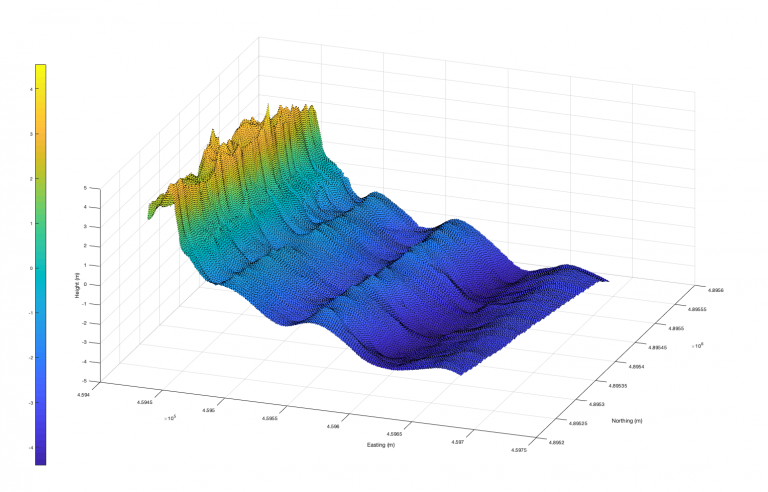 We are studying coastal sediment transport in though repeat bathymetric surveys and nearshore hydrodynamic modeling. Using and autonomous bout outfitted with a 200 kHz single beam sonar  we  map near shore bathymetry in a region of Lake Michigan to observe how sediment is migrating overtime in response to storms and normal wave conditions. Then using the Xbeach and DELFT3d numerical model we couple a nearshore wave models to sediment transport models to predict how shore morphology will change over time. These results are compared to our boat observations to validate the model. Then using the well constrained model we simulate the response of sediment transport to a reduction in lake level to learn how beaches will respond. 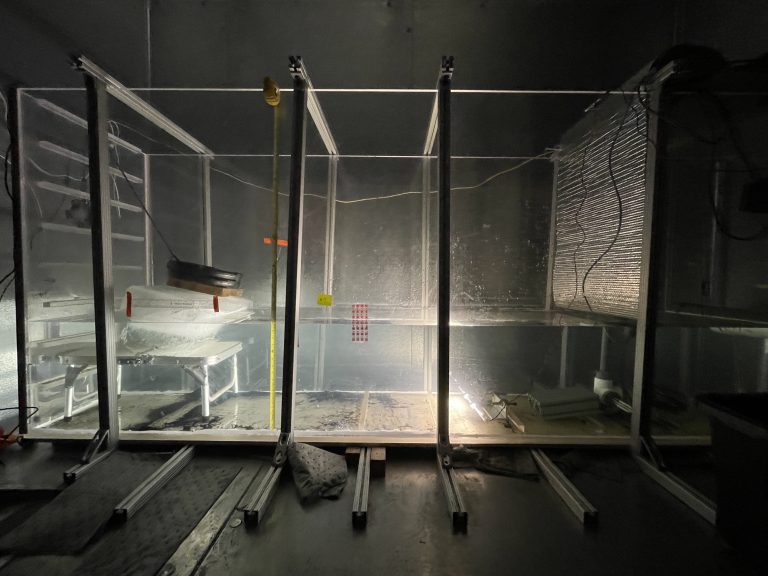 To study the processes active on cold coasts and within ice areas we have constructed a 3x1x1 m wave tank within the walk in freezer.  A plunging style wave maker connected to a variable speed and amplitude wave generator is used to create a range of waves. Temperature is controlled in the water and room using a series of heating and cooling sources. On the other end of the wave tank can either be placed a ramp to simulate cold beach processes and interaction with waves.  Several cameras including a subaqueous camera are mounted to capture evolution of the sample.  Pressure transducers are mounted to record wave heights.